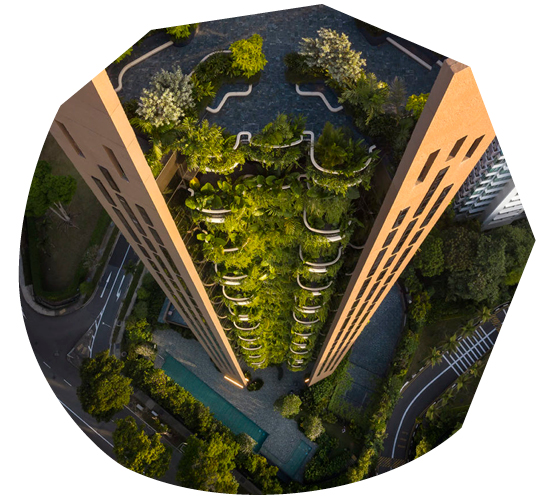 Singapore has been the blueprint for biophilic architecture long before the ideology became a popular design trend. Heatherwick Studios, a UK-based architectural firm, has been at work on Eden, their first residential project in Asia, with an ambitious biophilic concept.

The cylindrical tower features a lush facade of greenery made up of the plant life thriving on each of the building’s balconies.

“The dark oak color of the facade plays a vital role in differentiating Eden from the surrounding developments,” Mat Cash, group leader for the project, explained in an interview with Surface Magazine. “Finding that ideal tone that would appear natural and complement the concrete required more than a hundred shades of deep reds, purples, and browns to be tested under the Singaporean sun.”

The concrete underside of Eden’s balconies contrasts with its initial dark facade, while their shell shape both protects and lifts the greenery. From the beginning, the Heatherwick Studios team knew that the materials and color palettes used for Eden needed to be selected carefully.

“Subtle changes in the textures of the concrete and color of the facade had a significant impact on how you felt in the building,” Cash said. “We looked at hundreds of different color and material options and their relationship to each other to get something that we felt was the best possible combination.”

Click here for the full interview from Surface Magazine.